How a mathematician self-modeled over the last 20 years.

I’m tempted to label this guy the “Anti-Tufte” because of the MS Paint academic style on this website and the slapdash text layout. I hope this isn’t an insult—I find all of this work inspiring, quite inspiring in a way, it’s like dense mathematics have somehow wrapped around to zine aesthetics. (A lot of the visuals I’m talking about are linked on the ‘handout browser’ wiki page.)

The directory of blackboard shots is kind of like an interesting take on a timeline. I keep seeing interesting timelines out there—this one is cool because it extends in the future. There was another one, but I’ve lost track of it. I thought the site was too commercial, so I let it go. But now I just want it back for a minute. Ah well.

h0p3’s words: “I want to run around and hug everyone I’ve ever met.”

Okay, so, h0p3 has stumbled on to something pretty special—he asks, “Why aren’t other people losing their shit over this too?” This blog by Ian Wright (and, can I say, I love that this rare trove lives at the unassuming ianwrightsite.wordpress.com) is valuable for its writing and diagrams covering an intersection of certain math functions and philosophy, with aim toward understanding Marxism in modern times, all of which I’m just starting to pry open.

h0p3 specifically points to the two- (three-?) part essay “Hegelian contradiction and the prime numbers”, which I can’t vouch for yet. But the intro post and my light skimmings look promising. With a blog like this, I tire of the severe headiness—there never seems to be enough practicality or enough realization of the constructs—and the diagrams have me worried—but the writing is crisp and clear so far.

I hate getting my hopes up like this, because now I have some sense of a hidden or elusive truth buried in the center of this blog—and I’ve felt that almost constantly when approaching socialist blogs. But I need to remember that it’s just a blog: it’s not possible for it to have the answers and what’s usually lacking is enough imagination on my part. So this is sweet.

The thing—the key—the realization that’s needed before you can write shaders. Really, I think this will help.

I often have the students concoct their own story problems. I highlight the most insane.

I often have the students concoct their own story problems. Lately, I’ve been using a tablet-based drawing tool along with some stickers from Byte. (I would love to use Byte—but it doesn’t live up to COPPA.)

One kid came up with the pictured story problem. Pardon the grammar—we didn’t proofread these. 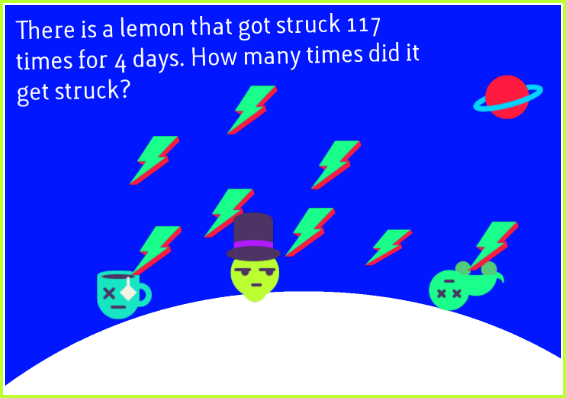 To clear this up: the lemon is struck by lightning 117 times each day! This lemon also appears to be alive, unlike the unfortunate turtle and teacup that found themselves stuck on the same hillside.

He is also probably actually a lime. How would that be—to have your key identity discarded during this defining moment? Maybe this is that elusive lemon-lime that the soft drinks always talk about.

Clearly we are dealing with a tough fellow here—an affluent, though morose, lemon-maybe-lime. We all hurriedly dashed out the answer so that we could know exactly how many strikings this poor citrus had endured! It was a tough four days.

Now for this one.

I asked the student, “Will the hobo still blow the monkey up after he spends his $40,000?”

He said, “He’s going to blow him up no matter what.”

Wealthy monkeys, don’t do business with hoboes! Especially hoboes trafficking 18 mil in explosives! That seems suspicious to me.

The last story problem I want to mention never actually materialized, but this next one is a math-in-feelings problem.

(Student who has been at the counselor’s office arrives late for the activity.)

Me: “Ok, (Student). We’re coming up with story problems.”

Student: “Ok. There are two guys. And they’re neighbors.”

Student: “And they hate each other in a hundred different ways.”

Student: “But they love each other in a hundred different ways.”

Me: “So they cancel each other out.”

Student: “No, so you take all of their feelings—how many feelings all together do they have for each other?”

One of the kids next to us goes, “Four hundred feelings!” jubilantly.