It’s more common to converse with a computer than to just dictate our instructions to it.

I’ve been helping a friend with a Discord bot, which has opened my eyes to the explosion of chatbots in recent years. Yes, there are the really lame chatbots, usually AI-driven—I searched for “lame chatbots” and was guided to chatbot.fail, but there’s also the spoof ‘Erwin’s Grumpy Cat’ on eeerik.com. 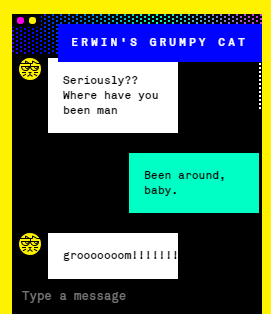 We’ve also quietly seen widespread use of sweet IRC-style bots, such as Slack or Twitch or Discord bots. These act like incredibly niche search engines, in a way. My friend’s own bot is for a game—looking up stats, storing screenshots, sifting through game logs and such.

So, yeah, we are using a lot of ‘one-line languages’—you can use words like ‘queries’ or ‘commands’ or whatever—but search terms aren’t really a command and something called a ‘query’ can be much more than a single line—think of ‘advanced search’ pages that provide all kinds of buttons and boxes.

Almost everything has a one-line language of some kind:

Humans push the limits of these simple tools—think of hashtags, which added categorical querying to otherwise bland search engines. Or @-mentions, which allow user queries on top of that. (Similar to early-Web words, such as ‘warez’ and ‘pr0n’ that allowed queries to circumvent filtering for a time.)

It’s very interesting to me that misspellings and symbolic characters became a source of innovation in the limited world of one-liners. (Perhaps similar to micro.blog’s use of tagmoji.)

It seems that these ‘languages’ are designed to approach the material—the text, the tags, the animated GIFs—in the most succinct way.

I wonder, though, if ‘search’ is the most impotent form of the one-liner. It’s clearly the most accessible on the surface: it has no ‘commands’, you just run a few searches and figure out which ‘commands’ work until they succeed. (If they do?)

It also seems relevant that less than 1% of Google traffic uses the I’m Feeling Lucky button. Is this an indication that people are happy to have the raw data? Is it mistrust? Is this just a desire to just have more? Well, yeah, that’s for sure. We seem to make the trade of options over time.[1]

Some sites—such as yubnub and goosh—play with this, as do most browsers, which let you add various shortcut prefixes.

Oh, one other MAJOR point about chatbots—there is definitely something performative about using a chatbot. Using a Discord chatbot is a helluva lot more fun than using Google. And part of it is that people are often doing it together—idly pulling up conversation pieces and surprising bot responses.

Part of the lameness of chatbots isn’t just the AI. I think it’s also being alone with the bot. It feels pointless.

I think that’s why we tend to anthropomorphize the ‘one-line language’ once we’re using it as a group—it is a medium between us at that point and I think we want to identify it as another being in the group. (Even in chats, like Minecraft, where responses don’t come from a particular name—the voice of the response has an omniscience and a memory.)