Huh: search engine that peeks through the cracks.

I’ve decided to exclude this from my directory for now, but I think this search engine raises some interesting questions. It indexes any video that is public, but not listed in YouTube’s searches. I’m not going to comment on whether these should be indexed—but I think this is a valuable tool in a surfer’s kit. (Continuation of the Searching the Creative Internet thread from the other day.)

More thoughts on moving beyond Google.

I’ve been saying for awhile that Google doesn’t work for me—but I think this essay crystalizes the thought in a much better way than I’ve been able to.

If you click through all 14 pages of results Google returns for [disney], nothing I could conceive of as interesting appears. Corporate website this, chewing-gum news article that. But if you refine it a little and search for [disney blog], then by result Page 7 things start to get interesting.

I’m not sure I agree yet with the idea that we can solve this with better search engines—I am really focused on trying to bring humans back in: as editors, as librarians, as explorers—we can do this kind of stuff really well, this is our strength! But I’m warming up to the idea that search engines could be a tool for these surfers.

What is clear to me is that it is time for separate tools. A search engine designed to be used by billions of people every day to do daily tasks is not one that will be appropriate for weekend meanderings though obscure topics. A content-sharing site like Reddit that encourages links to the New York Times will not generate thoughtful discussion.

See, to me the issue is that ANY algorithm involves encoding a ruleset that strictly describes what it is looking for. So by the time you encode your crate-digging behavior as an algorithm—it has lost its flavor.

Imagine a computer writing jokes. Not that that can’t work—but I think computers are far away from making jokes that aren’t inadvertant. So only by being nearly random does it become evasive enough to avoid malignant behavior. But a human is subject to its own evasive manuevers—it can get fatigued with sameness, it can become bored, it can become sensitive to the fashions of its time, it has its own ineffable subjectiveness. So it is capable of leaving its encoding—of evolving, or of returning to its roots, discovering something forgotten or uniquely nostalgic. (I think the algorithms are great for discovering the answer to a technical question—you want that search to be predictable.)

This is a great article and it describes a longing for the kind of thing that we’re all trying to build here—I know it sounds like I’m wrapping all of you out there—and those I’m communicating with regularly—in a blanket statement—if I am, then certainly push back—but I think this is what ties us: to preserve humanity on the Web, perhaps to find more meaning in this work. So I hope to see this Crawshaw person around here at some point.

Previously known as ‘1080.plus’, this tri-dimensional VJ chat portal is still real—it is real.

What was a very underground tri-dimensional environment for exploring YouTube videos and playing Blackjack(?) together—hell, who knows what you’re SUPPOSED to do here—is now even more underground and abandoned now that it reappeared without any fanfare. I ADORED this place and went looking for it many months ago. Well—it’s back and now seems to have an otherworldly sister site i1os. 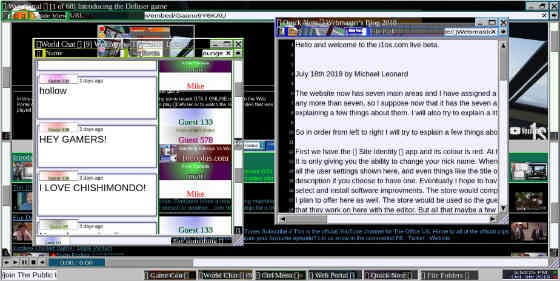 Strangely enough, the site was profiled in New York Magazine where the Canadian author (Michael Leonard) says 1080plus is “a project to make a multiplayer theater experience where you could join friends in a virtual world / virtual theater staring at the same virtual silver screen together, and talking about it as it plays.”

Ok, finally, something has survived of the old world.

I created Caesar Naples so I could have an influence in social media sites. The name is part of my personal brand of writing that only I can write. Over the past 3 years, I’ve been gathering influence on different popular social media sites, and I’m almost to a point where I can give control of the brand over to an organization of writers all aligned to the same purpose. He’s like an action figure, when he is friendly, fun, and inviting. But the information he delivers to people is often very uncomfortable for them to accept.

I think I am prepared for Caesar Naples to have an influence on me. I don’t know if you all will see it, but this ‘wiki’/‘book’/‘presence’ is at the crossroads of a lot of things that seem to be going on around here.

(From the section titled “Manchurian Candidates: The wild-card in your campaign.”)

There are echoes of zine culture in this—Charlie McAlister would love this, I think. The author is active on /r/conspiracy and seems to be forming a group there to write under this and other personas—though it’s difficult to tell whether it’s all made up—don’t think I care, I think it’s very exciting.

I see h0p3 in there too: in the Caesar Naples Wiki, there is reference to autism as a horcrux—this seems uncanny, given Sphygmus’ recent usage of the horcrux as a metaphor… What is going on??

Unlike h0p3, his writing is scattered everywhere, laced together with a bunch of Google sites—the copypastapublishing one is a good place to start, with the story Publishing Company 2002 and the To OK Gov piece. More are here. Some of the stories appear to be based on Markov chain generated text, others are quite lucid.

(Ah, I am not familiar with the ‘copypasta’ thing—this is my first exposure to it—it seems to want to take conspiracy-sounding or overserious rants out of context? I don’t know if it is a political thing—I am naive about all of that. There is a prolific person under this. I also am starting to see that people likely suspect my own self of being fradulent, of being h0p3, of being alt-right, of being an ARG, of being Brad Enslen, of being a schizophrenic, of being a radical leftist, of being a greatest showman—I am fine with all of these explanations and I think it would be a fortunate thing to even be thought of by someone somewhere.)

This person also has an understanding of community dynamic, another topic that is bubbling up lately.

I let my Caesar Naples act pour mercilessly into my communication with the writers of this community. There were personal details I shared that would make anybody uncomfortable related to my schizophrenia. I would host imaginary games where I pretended the chat room was a group of survivors in the apocalypse. I also made some very unreasonable claims and tried my damnest to justify them - all part of the Caesar Naples act. Eventually, I was kicked from two communities that I very much wanted to be part of, because they represented my instant recovery from exile.

Now that I’m no longer a part of those communities, I try my hardest to balance the wild, incredible parts of Caesar Naples with something more human.

“He never knew he was sick. And he died in the arms of a gal!”

It really sucks that Charlie McAlister died last year. I had really hoped to write to him more and maybe talk to him one day! Back in 1998, I found this cassette of his and it’s still out there! But you won’t find lyrics and tabs out there—he was truly underground. (There is a section of my upcoming link directory devoted to the muckpile of this rambling maniac.) In the meantime, please enjoy these wonderful lyrics to the second song.