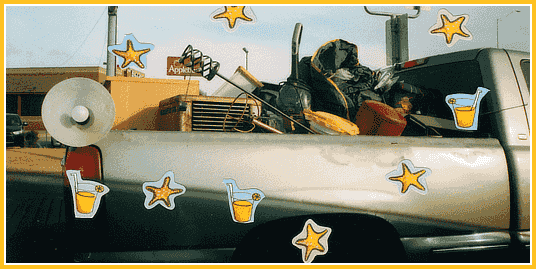 Discovered this site today on the Fraidycat Funtime stream[1]. I was looking through special.fish and found Bianca. In a way, this sticker art (the ‘past.present.with.stickers’ collection) feels extremely covid-19 to me, because it’s like a layer removed from reality. Actually it reminds me of kids putting stickers on a glass door - or yeah kids also do it with sticky semitranslucent slime-type shapes - and so it transforms these outdoor images into indoor images. A pleasantly trapped sensation - do you know what I mean?

The meandering essays on pop culture and animal observations - they feel reminiscent of Unimaginable Heights, such as this one on ‘yellow shows’:

There are some TV Shows that I consider to be yellow shows. Yellow shows aren’t necessarily yellow in color but they are definitely yellow in feeling and spirit. For example, Sabrina the Teenage Witch is a yellow show. Actually most shows that star Melissa Joan Hart are yellow shows even though she really doesn’t seem like an overly yellow person.

Yellow shows are all very mindless and watchable. They are upbeat, use non-funny humor, and are non-offensive.

The expression ‘non-funny humor’ is for keeps.

She goes on to explain how ‘yellow’ television could be generated by neural networks.

The hosts don’t always have to be human either. The host can be generated according to what the viewer finds the most soothing or most horrible. For example, I would choose a house cat to host a show like House Hunters. I could choose the location of the hunt which could be based on an actual place or an invented environment. If I want to look at homes near the fracking trash water in Denton, TX, hosted by Donna Dresch, I can submit that info into the program. Because the results would be so terrifying, I’m beginning to think that these wouldn’t necessarily be yellow shows. More like yellow with red stripes shows. Forget everything I’ve ever said.

This is amazing! I could have myself be the host as well as the guests. Me helping me build a condo in the Dakota plains. I would have to be patient with myself through that arduous fireplace selection phase. And Sherlock could show up and the character Deuces from the book Clone Codes.

There is also a page of Microsoft Excel art. She also offers to send an mp3 to anyone who emails her. Seems like a great way to stock up on free mp3s.

In a way, this site feels like an ad-hoc wiki. I like the concept. Throw HTML files in some frames and you can just begin to build a collection from there. (Although the frames are divs - you could do this whole site as a single page. I like that it is PHP, however - which stirs up fond feelings of the late 2000s.)