I actually kind of understand this—only because I think Mastodon is at odds with the Indieweb.

After only eight posts syndicated to Mastodon, Joe Jenett—who I really respect as a linklogger—he’s one of my main links on the right-hand side of my home page—has been removed from their public timelines. I’m not trying to stir up controversy and say that this is the wrong call—posts syndicated to messaging platforms can look like noise to them—but I think it’s good to talk about what’s up here. 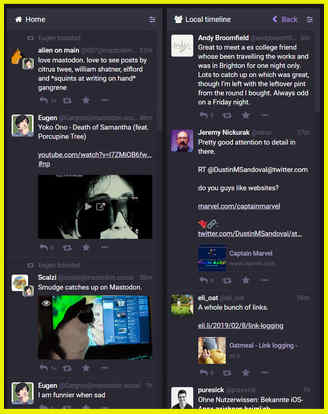 The problem (from the Indieweb point of view) is that the Mastodon public timeline (toot.cafe pictured at left) is a place to participate in the overall conversation—that instance’s inside jokes and tags. So it has a somewhat narrow view of what’s ‘relevant’—it expects some degree of participation.

However, I see that Eli Mellen is also active on Mastodon and does some syndicating there—although I don’t think it’s automatic. It looks like he does it by hand.

Which is something I’ve noticed as I’ve been syndicating to Twitter. Some posts just get mangled in the conversion and look more like noise than actual participation. I start to feel like I’m syndicating to a random forum where I’m still a foreigner. It feels like senseless self-promotion, rather than when I syndicate to IndieNews because I have something that fits the topic.

(As an aside, it might be interesting to start a Mastodon instance that basically acts like micro.blog. It’s for syndication, but also feels like a community where you go to find other blogs. Huh—this could work.)

It’s possible that Joe just found the wrong instance for his stuff—perhaps someone out there can give him some advice on that. I tend to think, though, that this does somewhat show that Mastodon is still a type of walled garden. It wants its own original ‘content’ so that it can be the center of the conversation.

This situation feels a bit gross, though, because you wish that the friction wasn’t there. That Mastodon could be another asset for hypertexters. Seems like another case of Wars of Conflicting Webs. Or maybe it is an asset—and it just has a narrow aim. It’s difficult because sometimes it feels like it’s positioned itself as more of a protocol than a Twitter replacement. I dunno—what’s the take here?